Few UFC stars have fallen from such a height as quickly or dramatically as Tony Ferguson. It’s not uncommon to see great fighters gradually lose their step as they progress past their peak, but for Ferguson, it was a steep drop from a 12-fight win streak to four straight losses. To put that even further into perspective, Ferguson was the interim champion during this streak and never lost the belt to another contender; plus was considered the second-best lightweight on the planet, putting Khabib Nurmagomedov’s reign in dispute with his success. All until Justin Gaethje seemingly came out of nowhere to replace the Russian champion and steal away Ferguson’s spot in one swift victory.

Since losing his shot at the belt, Ferguson has lost to three more contenders in a row. Fans have been quick to wonder if we have seen the last of El Cucuy’s success. That was until it was announced that Ferguson was making a drastic change, moving a weight class up and taking on Li Jingliang.

This matchup is interesting for many reasons. On the one hand, Ferguson, who was heavily out-wrestling in two of his four losses, will be now giving up a size advantage at 170lbs. His most recent loss was a brutal KO earlier this summer, and Jingliang has shown knockout ability against some of the scariest welterweights, including powerhouse Santiago Ponzinibbio. Ferguson is a slick, sharp, and creative fighter for sure, but even at lightweight physicality, power grappling, and pure power were almost never on his side. 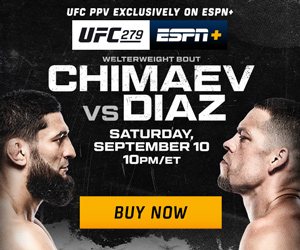 On the other hand, the opponents who span Ferguson’s losing streak are currently ranked #1,3,5, and #6 at 155lbs. Jingliang, at #14 among welterweights, is a step down the ladder in terms of skill, at least on paper. Although Ferguson does not carry the frame of many welterweights, he is just as tall as Jingliang and will even enjoy a reach advantage.

He also proved he can perform at welterweight before he came into the UFC and actually earned his shot by winning the Ultimate Fighter at 170lbs – although, as a caveat, often the show has been riddled with undersized talent due to the tournament format.

The question “Can Ferguson revive his career at welterweight?” is a complicated one. The move poses the potential for Ferguson to bounce back, he is unpredictable as a fighter, and a massive shift like this may be perfect to get him refreshed. He has proven he can be dangerous at 170lbs, and his technical and creative skills will carry up.

However, regardless of what happens at UFC 279, the welterweight division as a whole may be an even more daunting task than lightweight was. With larger and stronger grapplers like Kamaru Usman, Gilbert Burns, and Khamzat Chimaev ready to follow in Charles Oliveira and Baniel Dariush’s blueprints. With heavy hitters like Geoff Neal and Vincente Luque ready to test Ferguson’s chin after the damage sustained against Justin Gaethje and Michael Chandler.

Going up to welterweight may refresh Tony Ferguson, and with success on Saturday, it may bring him back to the winning side. Yet, is 170lbs the place to revive his career? It’s unlikely, instead I would like to see Ferguson regain his confidence and momentum and make his return to his natural weight class once he gets back on track.

UFC 279 Odds: Is Chimaev or Holland the favorite in new co-main event?