The promotion returns to T-Mobile Arena with an event headlined by a UFC Middleweight Championship bout between Israel Adesanya and Yoel Romero. The co-main event of the evening is a UFC Women’s Strawweight Championship that sees Zhang Weili defend her title against former champion Joanna Jedrzejczyk.

The five-fight main card commences at 10 pm ET and streams exclusively on ESPN+ PPV in the United States.

Keep up with all of the live results here. 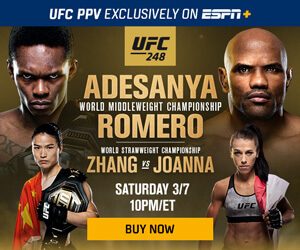